Closed for the season  beginning in April.

a small one on one shop ...we take the time to care that you have the right equipment

Skiing Conditions: It's been warm and the snow has been melting, but it is still skiable in a vast majority of trails. Trails were re-groomed by snowmobile and have had the skate decks classic tracks re-set a week ago. Ice dams are forming on some trails near bridges and culverts. Snow is in the forecast for this coming week.

Surface Conditions: Frozen granular snow on all trails now. Warming up again this weekend, but snow is forecast for the coming week.


April 4th, 2020
Skiing Conditions: Rated Good to Very Good. Trails are not being groomed now but remain in really good shape during the melt/freeze cyle from day to day. A few recent snowfalls of 1 - 3 inches have imporved the snow surface conditions a lot.

Skiing Conditions: Rated Good to Very Good spring skiing conditions! About 7-8 inches of snow fell last Thursday and Friday, making for improved skiing on the Pincushion trails. Good classic skiing now and skating in another day after the snow melts down a little further.

Trails Conditions Rated: Good to Very Good, all trails are in spring conditions. It's usuallly quite good later in the day after the sun has softened the frozen snow. Very good for skating and Good for classic skiing.

April 21st, 2018
Skiing conditions: Still Good in places but it's going fast now. All trails have been regroomed April 6th-7th after refreezzing last week. Trails were power tilled and a significant amount of new snow was turned up making for resetting of the classical tracks.
Compacted Base: 4-8";  New snow Last 7 days: 4"
Surface Conditions: Mixed frozen granular and packed powder snow over a deep snow base. 25 of 25 km of classic and skating open for skiing.
Last Grooming Day: April 7th 2018.
Total Snow for the Season: 84" since October 27th.

Skiing Conditions: Good - trails are in the process of being re-groomed for skate and classic skiing. The trails are being regroomed after this past weeks snowfall. East Overlook, Ole Hyvva and Hilfiker loops are closed because of ice flows.

Surface Conditions: Packed powder mixed with ranular snow. Most trails are in the process of being re-groomed and are open for skiing.

Skiing Conditions: Good to Very Good - somel trails have been re-groomed for skate and classic skiing. Groomers have been out and grooming has been continuous since the snowstorm this week. The Pincushion Mt. loop and ole Hyyvaa and Hilfiker loops all remainsblocked by down trees.

Skiing Conditions: Good to Very Good on most trails except the stadium area and the lower Pincuchion loop. Ungroomed frozen granular surface conditions with some fresh snow over the top.

Skiing Conditions: Poor to Good - Cooler temp's this past week and more snow has helped to refresh the trails.

Total Snow for Season since November 8th: 136" A new record!

Skiing Conditions: Good to Very Good skiing conditions. Fresh snow with some sun melted refrozen snow mixed in. Good for Classic skiing, Not so Good for Skate skiing, once the melt/freeze cycle restarts skating should be great for a few days.

Poor Skiing Conditions: The trails have melted out, considering how warm it has been, just a few patches of skiiable snow remain, but they are not connected... Skiing is over for the season.


Good Skiing Conditions: Approximately 20 km of trails have been groomed on Friday morning by Pisten Bully. 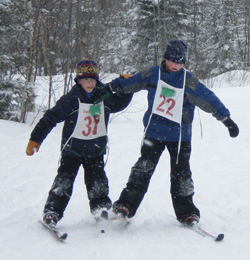 Website by Katherine Hellner and Sandra Schutte of Two Dogs in the Web, LLC